Did you know we have a Dorothy Dunnett Wiki?  Early days yet, but already we have over 500 pages created by our talented team of Dorothy Dunnett Society volunteers, and we envisage that at some point in the future we could end up with around 30,000 pages!  It’s amazing to think that our favourite author was not only able to retain all this information in her head but could also seamlessly weave fact and fiction into the most breathtaking historical and contemporary novels you could ever hope to read.

Take a look at our work in progress at dunnettcentral.org/wiki. If you are a Dorothy Dunnett Society member and would like to take part in this fascinating project, please contact Simon Hedges using our contact form.

Posted in Uncategorized | Comments Off on Dorothy Dunnett Wiki

enice to Cathay …’ begins Niccolò Rising, placing the series firmly against a background of traders and merchants, and alluding to the network of ancient trade routes along which luxurious goods and exotic produce travelled between the markets of the east and the west. In this issue we visit Uzbekistan in the company of a Dunnett reader to experience the romance of the Silk Road and its influence on the novels.

This is the third year the Society has collaborated with the Historical Writers’ Association to run a short story competition, and we are delighted to publish the winning story in this issue.

John Banks, the narrator of the newly published House of Niccolò audiobooks, summarises the four months he spent in 2018 turning Dunnett’s books into audio productions. He began recording Niccolò Rising in June and completed Gemini in October, an amazing feat of dedication! His engaging article offers an entertaining insight into the business of recording an audiobook.

We have a detailed exposition that makes the case for Marthe knowing far more than we realise about the secrets within the Crawford family. Our covers series reaches the 1990s, with a touch more discernment shown in the image choices, and we travel with Lymond through ten cold winters.

Booking is still underway for our fabulous annual gathering in Edinburgh from 24-26 April 2020, but spaces for some of the events are filling up fast so don’t delay – register today! As in previous years a waiting list will be established for those who don’t quite make it in time.  Check out the fabulous events programme and find the online booking form at weekend.dunnettcentral.org

Many congratulations to Kate Jewell who has won first prize in this year’s Historical Writers’ Assocation Dorothy Dunnett Short Story Award 2019. We are pleased to announce that an anthology of the six shortlisted entries is available from Amazon UK and Amazon USA.  The ISBN is 978-1703350159. 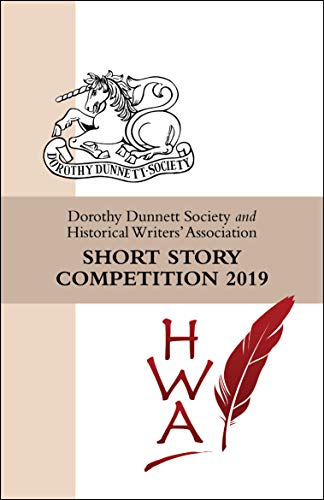 If you are a UK AmazonSmile customer, you can now support the Dorothy Dunnett Society in the Amazon shopping app on your Android device! Simply follow these instructions to turn on AmazonSmile and start generating donations.

If you do not have the latest version of the Amazon Shopping App, you will need to update. Click here for instructions.

AmazonSmile is not currently available for iOS users. AmazonSmile will notify us when it becomes available.

Posted in Amazon | Comments Off on Amazon Smile